The White Picket Fence: A Symbol of Americana 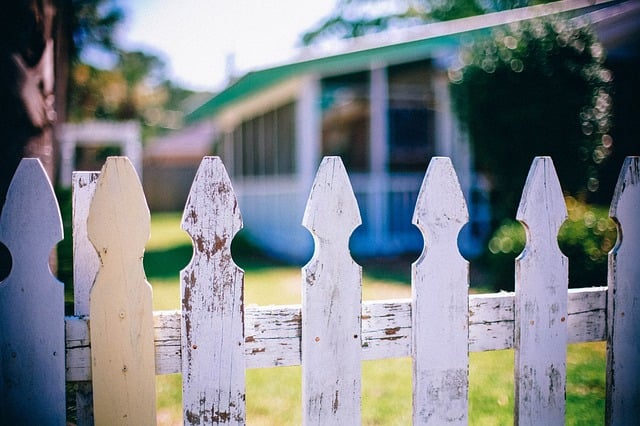 While many suburban neighborhoods today are surrounded by 6-foot privacy fencing, there is still something distinctly American and inviting about a white picket fence. It is friendly and welcoming. It draws to mind a Norman Rockwell print. You can almost see the kids playing in the front yard and neighbors visiting with one another standing next to that iconic fence. It may seem strange that a fence would evoke such a strong visual image. Why do we love the white picket fence, and where did it come from?

Understanding the history and meaning that we see in a white picket fence requires a little trip back in history. The word “picket” comes from the French word “piquet,” describing a pointed stick or board. These piquets were not made to build fences. They were used in battle. In Europe, they were used to protect archers from the cavalry in combat. Setting up a line of pointed sticks around archers on the ground worked well to deter attacks from the enemy on horseback. Weapons at the time were limited. If your enemy could not get close enough to attack you by hand, your chances of survival increased significantly.

When the early American colonists came over from Europe, they brought these battle strategies with them. Often using pickets to protect men during battle, many wealthy landowners also set up pickets around their property. Fences became inseparably connected with the prosperous middle and upper classes. It was a symbol of status and position. Whether to mark the borders of their land or to serve as protection—or both—picket fences quickly gained popularity. A mixture of lime and water was applied to the fencing pickets to protect them from weathering. This treatment turned the wood white and led to white becoming the traditional color for these fences.

From Defenses to Fences

In the 19th century, mass production of pickets made them a cheap and readily available material for fencing. These fences are also easily assembled without advanced woodworking skills or tools. The average American could build a picket fence by setting posts in the ground and adding rails and pickets with a hammer and nails. Thus, white picket fences spread all up and down the East Coast. No longer restricted to the wealthy, it became the fence of choice for middle-class America.

As suburbia spread, so did the picket fence. Families living closer together in suburban neighborhoods felt a need to define their property lines, and what better way to do it? A short picket fence keeps the children and the family dog from wandering out into the road but does very little to obstruct the view from your front porch.

With the dawn of the Cold War in the 1950s, American families began building a very different type of fence. Perhaps in search of more privacy or security, many people installed chain-link fencing around their properties instead. The white picket fences of the past became a symbol of a better time. It represented a longing for an ideal lifestyle – one that was gone. While many may rightly doubt that any time in the history of the world was perfect, the picket fence stood as a symbol of a simpler and easier way of living.

With overseas tensions defused, a new era of the white picket fence began in the 1980s. New Urbanist developers sought to recapture the look and feel of the 1940s walkable suburban neighborhoods. The style of the pickets and the materials used in modern fences vary from the traditional white-washed style used in the past. To make fences easier to maintain, some manufacturers offer picket fencing supplies made of PVC or aluminum. However, the appearance remains the same.

This attempt to bring back styles of the past has been met with mixed feelings. While some feel that white picket fences feel out of place in our modern society, there is no doubt that many still view these fences with nostalgia. When used throughout a neighborhood, they add more than just curb appeal to the homes; they draw residents into the community. It’s hard to undo the comforting legacy of the white picket fence.

If you’re in the market for fencing materials, check out Rocky Mountain Forest Products in Denver and Colorado Springs. As Colorado’s largest lumber yard, we’re here to help you build the perfect fence at the perfect price.