What Is an Under Deck Ceiling System?

Did you know that the majority of deck owners in Colorado aren’t protecting their decks effectively?

Many homeowners have no idea what an under deck ceiling is and why they should have one.

Don’t get caught in the (deck) rain without an umbrella, let us get you up to speed…

What is an under deck ceiling system? 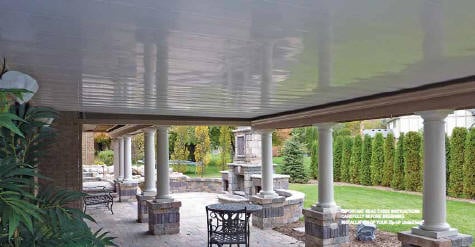 When you buy a deck, you usually just pay for…a deck. The thing is, most times you’re just throwing away good storage space, or, even worse, an extra gathering space for friends and family. Eventually, these empty spaces become a home for spiders and critters, or for collecting rainwater and ice.

That’s why many manufacturers have started selling under deck ceilings, which are vinyl coverings for the underside of your deck that help shed water.

Why should I have an under deck ceiling system?

To be efficient. Why would you want to waste so much good space, especially if you have a 6 foot high deck. Also, under deck ceilings help resolve the problem of ice and rain buildup.

This can be extremely detrimental to your deck because if that excess water  can freeze and  will expand and compromise the entire structural integrity of your deck. Plus, water seeping into the substructure can have a similar effect.

Look to under deck ceiling systems to steer clear of hundreds of dollars in damages for your wood or composite deck. Plus, the water shedding system will help lower the required maintenance for your deck!

So What Do They Cost?

After-market under deck ceilings are going for around $5/sq. ft. and the average Colorado deck is about 300 sq. ft. With your handy dandy calculator you can see that it’ll cost you roughly an extra $1500 dollars to open up that extra space and protect your property.

How about that for alliteration! But seriously, this composite deck by Green Bay Decking  is phenomenal. It removes the need for an under deck ceiling by using innovative interlocking deckboards that seamlessly funnel and drain any excess moisture to one side of the deck. It’s a brilliant design.

In our humble opinion, composite deck has the best value out of all the competition.

By integrating a composite deck with a water shedding system – all in one material – you’ll have the value of two designs for the cost of one.

Not only does combining the two systems result in saving money, but less systems to install means you’ll save on labor costs as well.

So think it over if you are going to add a deck to your house soon.